This summer has been a strange summer for fishing in our area.  The wind which is predominately east here in Sarasota has been  mostly out of the west.  This has been the first time since I have been in Sarasota in 9 years that we have had this predominate wind direction.  The other strange thing has been the bait situation.  We did not have the bait show up in the spring like usual.  What we have had is small bait that we could not even get on a hook.  The bait we are using now, August, is just now getting to be useable, however  we have had a good tarpon season which is now winding down.

Fishing has been fairly good the past two months with snook, trout, blues and a  very good mangrove snapper bite.  I expect this to continue the next month or so.  September is the time we usually have the schools of big redfish show up and hopefully they will show againl this year .  October and November should be the return of the kingfish, Spanish macs, sharks and the grouper will move closer to shore.  Grouper season ends December 3rd so hopefully we can get some good ones before then.  It has been so hot lately that everyone is waiting for the cool spells to start, even me and I hate cold or even cool weather.  I love the summer but it has just been brutal lately.

A couple of trips that stand out were with some people from Connecticut, Danielle and Alex along with cousin Alicia and Matt.  We caught a ton of snook and decided to call it quits but ran up on a school of tarpon and hooked up to a giant.  All four people on board fought this fish and we finally landed it after over 2 hours.  What a battle! 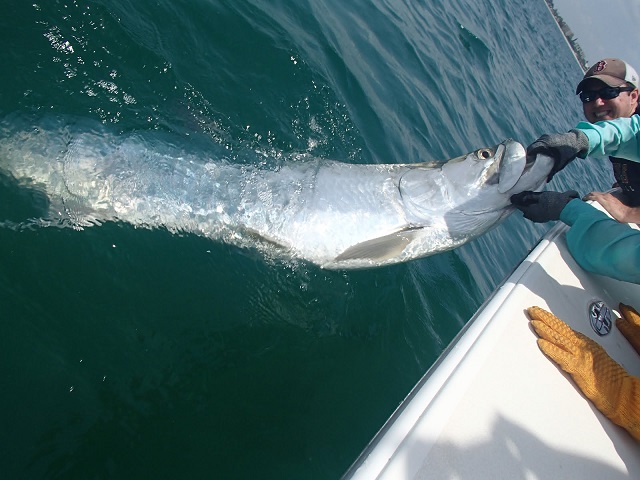 Another fantastic trip was with a friend Chris and his dad Chuck.  We wrecked the big speckled trout.  Almost every cast for an hour was these big ones. 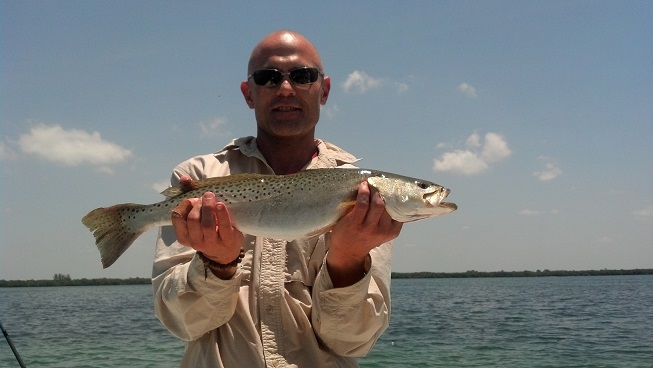 The sad news is I might not get to participate in the early fall fishing as I am having shoulder surgery next week August 14.  Torn rotator cuff is the problem and have no idea how it happened.  Doctor said it was from sleeping on my right side my whole life.  Recovery is suppose to take 3 months to a year. My goal is to be on the boat in 10 weeks so we will see what happens.  To those reading this that have booked a trip with me already need not worry as my son will take you.

I hope all of you are enjoying the new look of our website.  My son has become quite good at making videos and I think the ones on the site are “topnotch”.  Please continue to book trips with us. Let my son know when you call or email that you usually fish with me and he will take good care of you.  I look forward to getting this surgery over with and will be back on the boat as soon as possible.

Posted by Capt. Tom Jr. on Aug 9, 2014 in Fishing Reports | Comments Off on August Report

Its Mid august now and the summer heat has been relentless. The tarpon season finished up very strong back in July with good numbers of fish still in our area late into the season . I was able to get the last fish of the season myself after one of my bay trips. I decided to build two new tarpon rods just before the end of the season . They take several weeks to finish , so when i finished them , i was really done with tarpon trips. So after one of my bay trips , i took a few crabs out to the beach just to make a few casts to see how the new rods cast and how they felt. The 9 foot rod cast like a dream and i was surprised to see a few single tarpon still gliding down the beach . I made a few attempts with no bites. Then i got a fish to turn on the bait and he inhaled my crab . He turned directly at me and i pulled the bait right out of his mouth! I laughed about that one and hooked up another bait. I took 20 minutes or so to see another fish , but from the tower i could see them far out as they approached me. On this attempt, i was spot on . Great cast 20 feet in front of the big single fish. The crab sunk slowly out of sight as the fish got up to it and disappeared down toward the crab. A light thump on my line , and it was on . I had a time getting out of the tower with the rod and fighting the fish with a 8 foot hammer-head shark chasing the tarpon around . I have it all on video. in fact, i have the entire build of the rod and the catch on video waiting to be edited for the web site. Should be pretty cool. 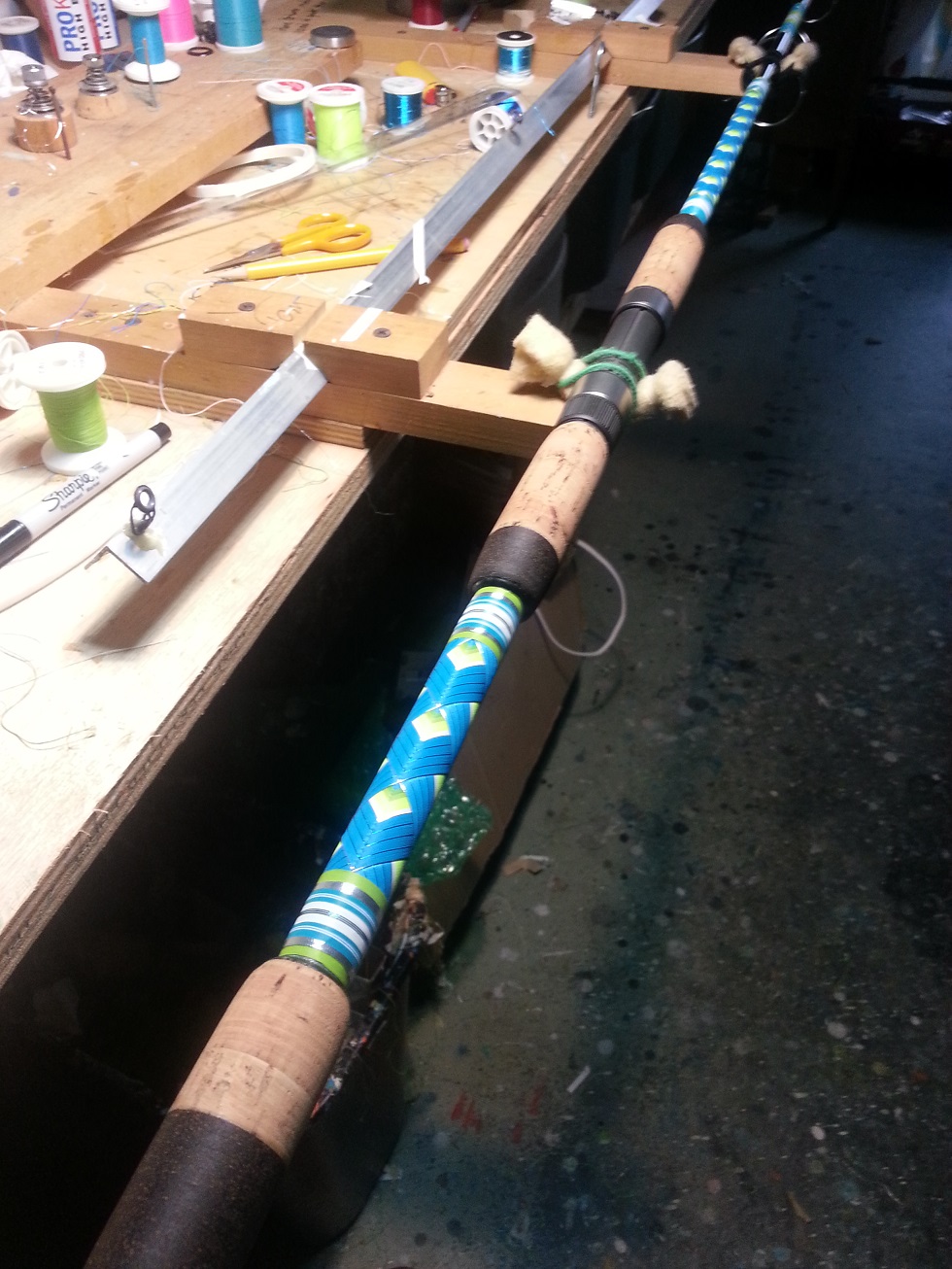 The fishing after tarpon season has been up and down . I did have a good trip offshore with some good guys in early august. We were able to get some nice grouper, mangrove and yellow tail snapper, ans big trigger fish. The bay fishing has been ok with good numbers of trout and some keeper size snapper on the deep flats. Most of the fish are small , but plenty of them . I expect the fishing to get better as the days get shorter and temperatures start to turn for the cooler. The big red fish schools should show up in our bays soon and the offshore fishing will pick up closer to shore. I’m looking forward to seeing some of my good clients here in the next few months for some of both types of trips. 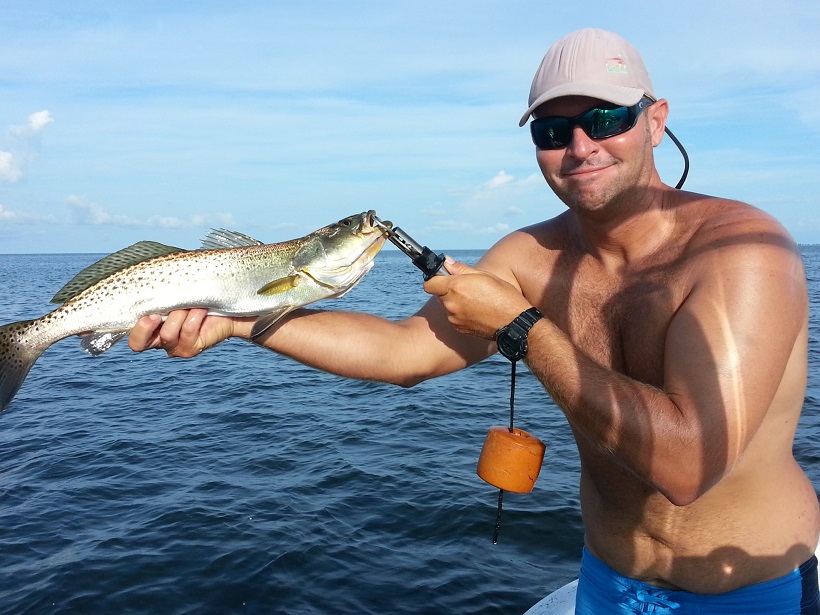 As most of you have noticed , our new Top Notch fishing web site is up and operating . We are so please with the new design and hope you will like it too. Make sure to check out the gallery for our new videos. The 2014 tarpon highlights video is up with just a sample of the action from the season . The new fishing report page has entry from dad and i both . I will be taking the rest of the month off this august for a vacation to Crystal river for scolloping and a trip to the rainbow river for a chance to coool off in the 72 degree river. Tight lines from Capt. Tom jr.

Posted by Capt. Tom Sr. on Mar 26, 2014 in Fishing Reports | Comments Off on March Madness

March has come and gone and I am basically glad. All the small cold fronts and all the wind have kept things mixed up. The bait is still not here as I write this. The good news is that the kingfish have showed up and the threadfins which they like to eat are here but all the white bait hasn’t come in yet. Maybe last night was the last front we will see. It was rather weak anyway just lots of wind today—the 9th.

We had some great trips in March even without the bait. We caught some nice trout, sheepshead, black drum, redfish, spanish macs, pompano and kingfish. When the wind wasn’t blowing the fishing was pretty good all on shrimp. 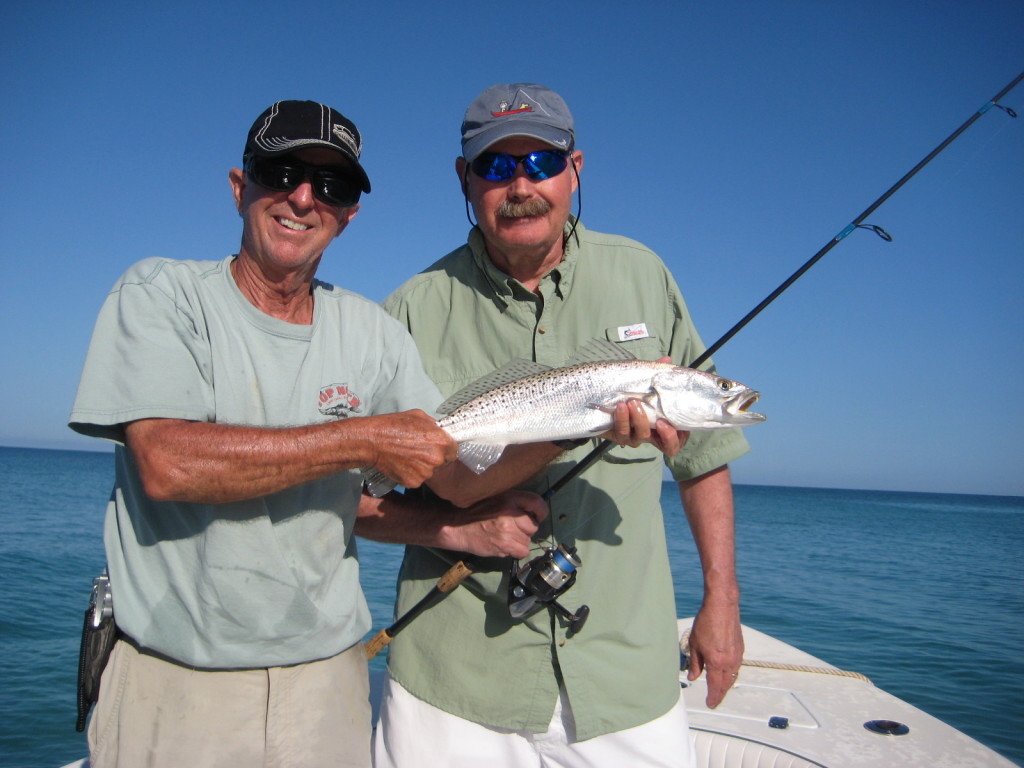 Now that April has rolled in we should have good weather and good fishing for kingfish, spanish, trout, snook, snapper and grouper. April has always been a great time for the big trout. I love to see those big ones as they are so pretty.

May will bring on the snook and tarpon so that is a busy time for us. Be sure and book early for those May June trips.

The weather was perfect today for an offshore trip with my good client Chuck Krause and his Brother in law John. These guys like to catch a few nice fish for the grill and the calm seas and mild temperatures made for a pleasant day on the gulf. We stared the day by catching some live sardines and stopping by the bait shop for shrimp and ice. Next we made our peaceful run 10 miles out to the 45 foot range and anchored on one of my good rocky bottom grouper holes. I normally catch nice gag grouper at this spot, but today the grouper were all reds. We caught many shorts and managed to get several nice ones in the keeper size range. 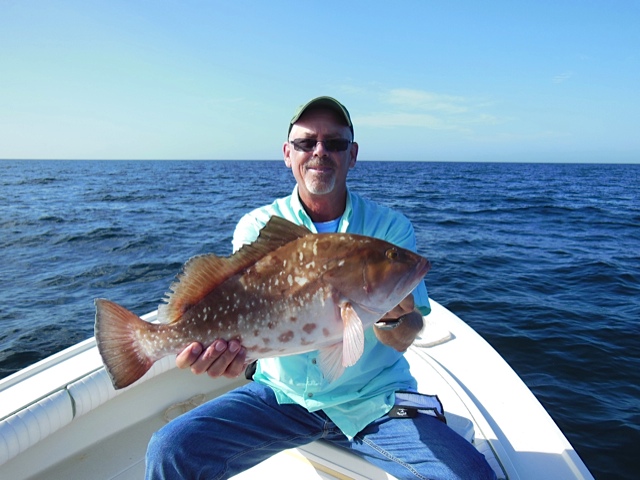 Next stop was for snapper. We usually get a good run of nice size mangrove snapper this time of year. I like to target them with shrimp on a light weight and light tackle. We did pretty well with a dozen or so for the cooler. Also managed a hog fish and some other mixed fish to make it interesting. The small amberjacks nearly broke chucks wrists because the drags were set pretty tight. I remember laughing a lot at chuck when he was pulling up those 10 pound jacks. They really put up a good fight. 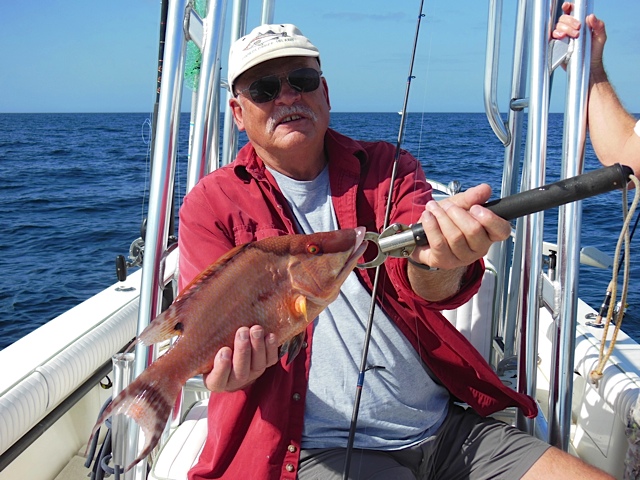 On the next stop, I headed back in to a 40 feet and tried one more time for a gag grouper. We found them alright. Chuck hit one right away, but was instantly rocked up and broke him off. That happened several time in a row and by the time I got the right tackle together for them the bite was done. Sometimes it helps to be a little bit away from the main structure when you are grouper fishing. If the fish will move to your position away from there rocky home it makes it easier to catch them some times. We caught some more red grouper and headed back in. Chuck took a few shots of our catch and I cleaned the catch for the guys to take home. Another really nice day on the gulf. Looks like a cold front will hit just before thanksgiving and might keep us off the water for a day or two.

Happy Thanksgiving from us at Top Notch fishing to all of our clients and friends.