This fall has been a great fall fishing time. The weather is still in the 80’s and its almost 2016. The only problem we have had is the wind which has made offshore conditions a bit tough. We did have some red tide last month which hurt the bay fishing. It has finally left us and the bay fishing is picking up.

We had some great fall snook fishing and this is the second largest one caught on my boat. Alicia battled this one and did a great job fighting it and I was so relieved to get it in the boat. We released it to fight again some day. 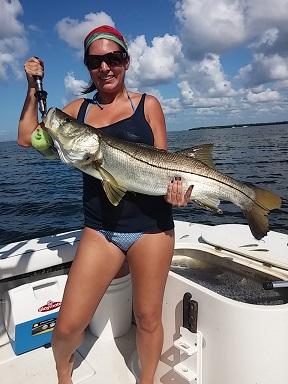 We have been doing mostly offshore fishing due to the red tide. We have had some great spanish mac fishing and some really great grouper fishing. Dec. 3rd was the last day of gag grouper season but it ended with a bang. My son and I went out together to try and put a few fillets in the freezer. We did good as you can see. 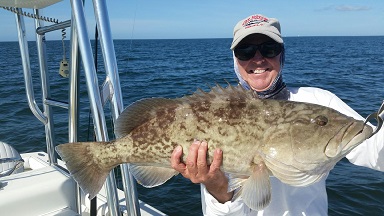 The big spanish macs were around for a couple of weeks and we had a few good trips with them as the target.

Another great fish we have caught is the hogfish, which are getting more abundant for some reason. We almost never caught them prior to a couple of years ago but now they are becoming part of the catch on almost every trip. They are one of the best eating fish in the gulf. 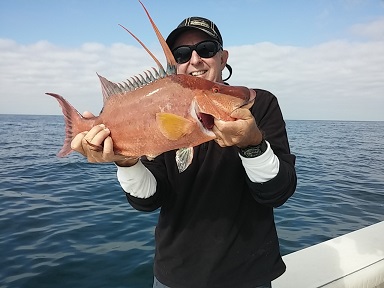 The mangrove snapper bite has been good also. A friend of mine and I went and put a limit of nice ones in the boat. 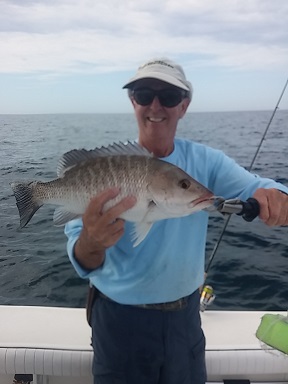 Right now the kingfish are going strong and I would love to get some if the wind would lay down so I can get out there. On this trip last week Laura and Chris killed the kings. We caught them till everyone was tired out!  I look for the kings, spanish, snapper, trout and redfish as the target species in the coming month. Feb. will be some nice sheepshead if it gets cooler. I would just as soon it would stay in the 80’s all the way to spring but I know cold weather is coming soon. I hope you will come on down and enjoy some fishing with us in the coming months. 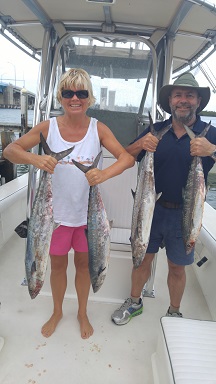 Thanks for your business this past year and hope all of you had a very Merry Christmas and will have a great New Year. Capt. Tom Sr.